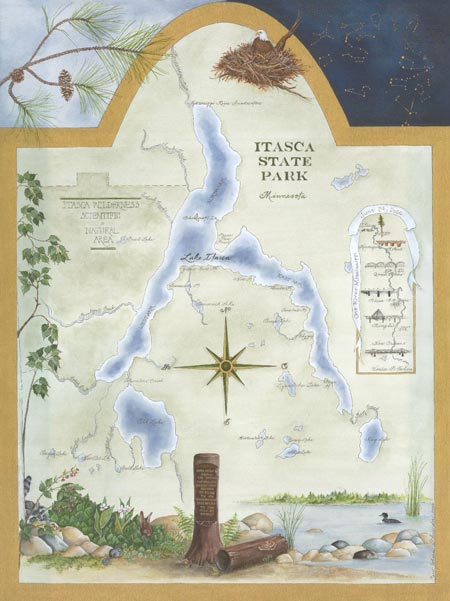 In honor of PRLAAC’s 10th anniversary in 2015, we began offering a 16x20-inch print of Itasca State Park. Eight prints remain and are available for $25 (plus sales tax) at Cattail Creek Framing & Fine Art Gallery, 215 Main Ave S, Park Rapids. Cattail Creek is offering a 10 percent discount on the cost of framing the prints. A portion of the sale of the remaining prints will go to Heartland Arts.

Local artist Carol Johnson Schneider created the original painting for one of PRLAAC's first events: collaboration with a local dance studio and dancers to promote One River Mississippi. One River Mississippi united performers at the headwaters of the Mississippi in Itasca State Park, Minneapolis/St. Paul, the Quad Cities in Iowa, St. Louis/East St. Louis, Memphis, New Orleans and Plaquemines Parish in simultaneous, site-specific performances on banks and bridges in June 2006. The goal was to bring national attention to the river, its health and shared culture.

The headwaters at Itasca was packed with viewers who witnessed several dance performance groups, solo dancers and a Native American drum group from White Earth.

Radio simulcasts allowed a wider audience to share the performances which also were recorded. Some scenes can be viewed on YouTube or visit the Itasca Park website for more about the event and some photos. Heartland Arts also holds some memorabilia from the event and the CD compiled after the event. If you would like to view a CD of the event, please contact us. 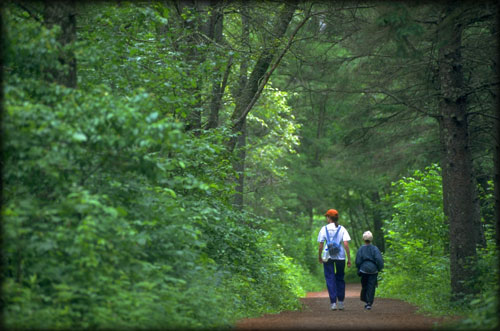 Established in 1891, Itasca is Minnesota's oldest state park. Today, the park totals more than 32,000 acres and includes more than 100 lakes.

A print of Carol Johnson Schneider's original painting would make a wonderful gift or keepsake and a great way to support Heartland Arts.

Support Heartland Arts in our mission to promote arts and art education.